What Are the Chick-fil-A Sauces? (And Can You Get Them in Stores?)

Besides the chicken, Chick-fil-A is so popular and addicting, largely due to its amazing dipping sauces! Each sauce has a unique recipe and is finetuned by Chick-fil-A menu chefs to pair perfectly with just about everything on the menu.

Chick-fil-A offers 8 different sauces free with orders ranging from 25 to 140 calories per serving. You can buy bottled Chick-fil-A sauces at participating restaurants and stores in select states. The most popular sauce is the Chick-fil-A sauce, which is a mixture of Honey Mustard, Barbeque, and Ranch sauces.

In this article, we’ll cover everything you need to know about each Chick-fil-A sauce on the menu. We’ll also explain where you can order a bottled Chick-fil-A sauce to keep at home. Lastly, we will touch on Chick-fil-A’s dressings and how to find your salad’s perfect dressing pair!

So many choices! Which Sauce is your favorite? pic.twitter.com/ShNLhMAKns

Chick-fil-A’s most popular sauces include the original Chick-fil-A, Polynesian, Honey Mustard, and Barbeque sauce, but there are also other choices. Most sauces come in a 1oz (28gr) serving size packet that you can get with your meal or side order. They range from 25-140 calories, and some are fat-free.

Check out the table below for the complete list of Chick-fil-A sauces, each standard serving size, and the calories in each sauce.

The sauce has a complex flavor profile where customers taste tang from the vinegar and lemon juice and a touch of sweetness.

The Polynesian sauce is another hit on the dipping sauce menu. The sauce tastes similar to a sweet and sour sauce. The main ingredients in the Polynesian sauce are sugar, corn syrup, soybean oil, vinegar, tomato paste, and beet juice.

The Polynesian sauce pairs great with chicken nuggets, fries, and sandwiches and even can be used as a salad dressing.

The Honey Mustard sauce is a crowd favorite because you get the flavor of mustard and spices and a touch of sweetness from the honey. The sauce mainly consists of water, honey, sugar, vinegar, mustard seeds, and spices.

If you are a fan of a sweet BBQ sauce, then the Chick-fil-A Barbeque would be just for you. It’s like a classic BBQ sauce but blended with onion and garlic that you can distinctly taste.

For those interested in a fat-free dipping sauce option, your choices are Barbeque, Honey Mustard, and Sriracha Sauce!

The Barbeque, Honey Mustard, and Polynesian sauces are free of common allergens.

What Is in the Chick-fil-A Sauce?

The iconic Chick-fil-A signature sauce is made by mixing three of Chick-fil-A’s dipping sauces. These sauces include Honey Mustard, Barbeque, and Ranch Sauce.

The Chick-fil-A sauce was accidentally made by a team member back in the 1980s who mixed the classic BBQ sauce and Honey Mustard sauce.

Although delicious and addicting, the Chick-fil-A sauce is high in Sodium (170mg) and Fat (13g).

You can get packets of Chick-fil-A sauce complimentary with your meal or purchase an 8 or 16-ounce bottle to take home and keep in your fridge.

We will touch more on purchasing bottled Chick-fil-A sauces later in the article!

According to Chick-fil-A’s menu team chefs, some of the best ways to enjoy your Chick-fil-A sauce include:

Get more of the sauce you love. Sauce containers are available to purchase at your local Restaurant or through the Chick-fil-A® App. pic.twitter.com/Rimp8Nz38e

Can You Buy Chick-fil-A Sauces at Restaurants?

You can check out the Chick-fil-A app or contact your local Chick-fil-A restaurant to see if they offer the 8-oz sauces for purchase. If so, you can simply add them to your order when placing it through the drive-thru or with your cashier.

You can also purchase 8-ounce bottles of Chick-fil-A sauces when placing an online order. Here is how:

Can You Buy Chick-fil-A Sauces in Stores?

Chick-fil-A sells 16-ounce bottles of Chick-fil-A and Polynesian sauce at participating retailers in select states across the nation. The 16-oz bottle of sauces costs around $4 per bottle, but prices may change and vary by location.

Unfortunately, the two Chick-fil-A sauces are only sold at participating retailers in a select few states; however, they are always expanding to new states.

The most updated list of states you can buy Chick-fil-A sauces in stores includes:

Even if your state did not make the above list, I would still check your local retailers included in the list of participating retailers below. I live in Florida and have seen Chick-fil-A sauce sold at my local Walmart and Winn-Dixie.

Below is the list of stores where you can buy Chick-fil-A sauces:

Walmart sells the Chick-fil-A and Polynesian sauce individually for around $4 per bottle. You can also purchase a bundle pack of two of the same sauces.

If they are not available at your local Walmart, you may be able to purchase them online and have them shipped to you.

Target is also another retailer that sells Chick-fil-A sauces individually. You can purchase at participating stores or order them online. Check out the Chick-fil-A and Polynesian sauce listed on their website.

Amazon offers a wide array of purchasing options for Chick-fil-A sauce enthusiasts. They sell the standard 16-oz bottle of Chick-fil-A and Polynesian sauce. They also offer numerous bundles for purchase, including:

The perk of ordering through Amazon is that you don’t have to live near a participating store or in a particular state to purchase, plus you have a lot more options for ordering.

The downside is there is an upcharge on the bottled sauces sold through Amazon.

Fun Fact: 100% of the royalties earned by Chick-fil-A for each bottle of sauce sold is donated to the Chick-fil-A Remarkable Futures Scholarship Initiative, which supports team members in pursuing their educational goals.

Do You Need to Refrigerate Chick-fil-A Sauces?

The individual packets of Chick-fil-A sauces you receive complimentary with your order do not need to be refrigerated. However, Chick-fil-A recommends refrigerating the bottled sauces after opening.

The individual Chick-fil-A sauce packets have a shelf life of up to 90 days. So if you have leftover packets, you can stash them for your next trip or eat them with a meal at home.

Although there is no need to refrigerate them, it may ensure they keep their quality and last even longer.

Chick-fil-A sauce bottles and tubs need to be refrigerated after opening. Also, check the expiration date on the individual bottle or tub to ensure how long the product will be good for.

All that stands between you and a #GrilledMarketSalad is choosing a dressing. pic.twitter.com/fPIZT0MIaA

Chick-fil-A serves 7 different dressings that can be paired with the salads on their menu. Each dressing packet comes in a 2-ounce serving size. They offer both light and creamy dressing options ranging from 25 to 310 calories.

Check out the table for the complete list of Chick-fil-A dressings and the calories per dressing.

According to the Chick-fil-A menu chefs, each salad on the menu has two salad dressings that are meant to be paired with it.

One pairing is a lighter option to keep your meal low-calorie and healthy. The second option is for when you are looking to splurge a bit or celebrate your cheat day.

You can view the chef’s recommended dressing pairings in the table below.

The Garlic Herb Ranch and Light Italian pair great with any salad. The dressings are also great to pair with the Chick-fil-A Cool Wrap.

We have covered what you need to know about Chick-fil-A’s iconic sauces and dressings, including the nutrition facts and what items to pair with, so you can make the right sauce or dressing decision for your next order.

For those who just can’t get enough of Chick-fil-A sauces, there’s good news! You can stop hoarding all your extra sauce packets at home and purchase your own bottled Chick-fil-A sauces at participating retailers!

If you’re interested in finding out more tips about Chick-fil-A, check out the related articles below.

Chick-fil-A Sandwiches: Here Are the Ingredients, Calories, and Prices

Chick-fil-A Gift Cards: Where to Buy and How to Use Them 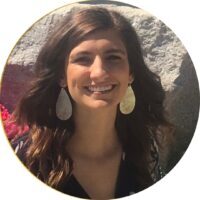 Kayece Flood is a nutritionist and content creator with over two years of experience writing articles and recipes in the nutrition and food industries.

Being a military wife, she has lived in different areas around the U.S. and enjoys traveling. When not working, she likes going to the beach, hiking, or camping with her family.