Since its first location’s opening in 1986, Five Guys has steadily climbed to the top of America’s most popular burger chains.

With over 1,300 locations in the US, much of Five Guys’ success is thanks to its nostalgic decor and quick service. But it’s no secret that Five Guys’ claim to fame is their juicy and fresh burgers.

Five Guys has a burger for every appetite. With eight different burgers and a variety of toppings to mix and match, there are countless combinations to try on your next visit.

While looking at Five Guys’ menu, you might notice that some burgers have the word ‘little’ in their title. So, what’s the difference between a regular burger and a ‘little’ burger at Five Guys?

The answer is surprisingly simple – a regular burger comes with two patties, while a little burger only has one.

Five Guys also offers the option to order your burger “All The Way.” This means your burger will be topped with lettuce, tomatoes, pickles, grilled onions, grilled mushrooms, ketchup, mustard, and mayonnaise.

All burger toppings at Five Guys are completely free, and you can add as many or as few as you want to build your dream burger!

Plus, all burgers on the Five Guys menu can be made sans bun in two ways: requesting that your burger come in a bowl or ordering it wrapped in lettuce.

With so many options, it’s no wonder people keep returning to Five Guys for more.

In this article, we’ve rounded up the best Five Guys burgers to help you decide what to order during your next visit.

These buns are used for all Five Guys burgers and are baked daily, ensuring that your patty is presented on a fluffy, fresh bun.

Each patty weighs just over 3 ounces for a satisfying bite with each and every go.

The Hamburger can be ordered with as many toppings as you want for no additional charge.

Just like its big brother, the Little Hamburger is served between two toasty buns.

It comes with one hand-formed patty and can be customized with as many or as few toppings as you’d like.

Even in its simplest form, Five Guys’ hamburgers stand out from other fast casual chains.

The patty is always the star and made with high-quality, never-frozen beef coming straight off the grill and onto your bun.

The classic Cheeseburger is unsurprisingly one of the most frequently ordered items at Five Guys.

Just like the other Five Guys burgers, you can add as many toppings as your heart desires to your cheeseburger.

The Little Cheeseburger comes with one patty instead of two but otherwise is identical to the regular cheeseburger.

After your patty is grilled to juicy perfection, a thick slice of American cheese is added to the sandwich.

And yes, you can ask for multiple slices at no extra cost!

Is there a better combination than a burger and bacon? Many diners seem to think not – that’s why they can’t get enough of Five Guys’ Bacon Burger.

This burger is made with two patties, and crispy applewood smoked bacon.

The bacon in this burger adds a satisfying crunch to each bite, and the sweet smokey flavor throughout makes for a burger you won’t soon forget.

The Little Bacon Burger is made up of one patty, a few strips of applewood smoked bacon, and the classic toasted Five Guys sesame seed bun.

Jazz up your Little Bacon Burger by ordering it with any number of toppings. Popular additions include BBQ sauce, relish, and jalapeno peppers.

This burger, arguably the most popular item on the menu, is made with thick slices of melty American cheese and applewood smoked bacon layered between two juicy patties.

With gooey cheese, crispy bacon, and fluffy buns, the Bacon Cheeseburger is a texture lover’s dream.

The Little Bacon Cheeseburger may have ‘little’ in its name, but don’t let that fool you – this burger is full of flavor.

Just like the regular bacon cheeseburger, this sandwich comes with melted American cheese, applewood bacon, and a toasted sesame bun.

However, unlike the regular bacon cheeseburger, this burger comes with one hand-smashed patty instead of two.

With an abundance of possible combinations for your Five Guys burger order, it can be overwhelming to decide how you want your burger to stack up.

Next time you stop by Five Guys, use our list to narrow down what you want to order.

The good news? Each burger at Five Guys is carefully made to order with the freshest ingredients available, so no matter what burger you choose, you really can’t go wrong.

For more information about Five Guys, check out the articles below. 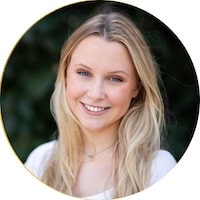 Samantha Jenkins is a food writer and digital marketing manager with a passion for storytelling, reading menus, and eating really good food.

In her free time, she enjoys baking, performing in musicals, and cohosting the East Coast Haunts podcast.